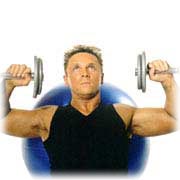 When it comes to bulking up, toning and building muscles, the right plate of food on your table can be just as essential as the right weight plate on your barbell. When you're lifting weights and trying to build your muscles, it's critical that you get adequate nutrition. Fitness experts have identified several foods that rank as some of the best options for your muscle building diet.

Although technically a seed, this protein source contains a complete set of branch chain and essential amino acids, making it a tissue- and muscle-building powerhouse. "Its nutritional composition is better than most grains, so try to have one cup a week, alternating it with other healthy starches such as sweet potatoes and brown rice, It's a great breakfast cereal, especially when flavored with cinnamon.


"Men don't eat the 16 ounces of protein they need every day, and this is a great substitute if they don't like cottage cheese," says Dr. Dansinger. Made from whey, this soft cheese is rich in amino acids, which speed muscle recovery after a workout. Flavor it with jam and spread it on a cracker, or put half a cup in a blender with skim milk and fruit for a postworkout cheesecake-flavored smoothie. It also tastes great on its own with olive oil and fleur de sel.

Made from soybeans, tofu was once the bastion of vegetarians. But the plant protein in these pressed bean curdsavailable firm or soft, and delicious when marinated and tossed into saladsprovides a full complement of amino acids, as well as isoflavone, which helps muscles recover from exercise. A serving is four ounces. Eat one to three servings a week.

These flat beans don't just make delicious soups. They're packed with protein, not to mention B vitamins and zinc, which are important for good sexual health. Eat half a cup twice a week, cooking them for about 30 minutes (until they start to break apart) to create a satisfying mashed-potato-like texture. "A single serving will help you cover all of your nutritional bases,"


An egg nets you a whopping 7 g of protein. Unlike many other forms of protein, it's considered "perfect" in that it contains all of the amino acids your body needs
The old school of thought was that you should eat egg whites rather than whole eggs in order to get the protein without the added cholesterol. But recent studies have proved that the fat in the yolk is important to keep you satiated, and the benefits of the minerals and nutrients in the yolk outweigh its cholesterol effect. Eggs deliver the most nutrients for the fewest calories and provide the most satiety per calorie consumed. Plus, eggs contain choline, a B vitamin that studies have linked to improved brain function. "Eat three or four servings a week for breakfast or as a protein alternative at other meals," says Bowerman.


All yogurt provides muscle-friendly protein as well as probiotics that keep your digestive tract healthy and your immune system in top form. "But the Greek variety is thicker than regular yogurt, so it has more protein, and it's sweeter and heartier," says Clark. "It's man-style yogurt, with a velvety texture." Mix eight ounces with fruit for breakfast, or spread it on flatbread and top with chicken and onions.


Few foods are better for people trying to slim down and build their muscles than peanut butter. "Men's Fitness" calls it a "super food" and the "ultimate guy food." Peanut butter is beneficial because it contains high amounts of protein, which helps your body repair muscles, and it's also low in calories. Spread it on your favorite whole grain products, add it to your protein shakes, or simply enjoy a scoop on its own.


Milk ranks as one of the "best of the best" foods for a bodybuilder's diet, according to "The New Rules of Lifting: Six Basic Moves for Maximum Muscle." Milk has lots of protein, and it also contains 264 mg of calcium, which plays a role in muscle development as well as bone strength. Make milk even healthier by adding fresh fruit -- rich in antioxidants that can help your body cope with the stress of lifting weights -- and high-fiber cereal, which aids digestion.


High in inflammation-fighting omega-3s, wild red or sockeye salmon (canned or fillet) is an excellent low-mercury alternative to canned solid tuna, which can be high in the toxic metal. "Defrosting a frozen fillet for dinner makes a great substitute for steak," says Dr. Dansinger, "or pan sear a fresh fillet with olive oil and kosher salt." Recent NFL probes suggest that many teamsincluding the Bengals and the Giantsserve it to players to lock in strength gains and fuel performance. But while pro athletes might eat 16 ounces at once, you're better off with three or four six-ounce servings a week.